There are two types of influenza viruses that cause serious disease in humans, types A and B. A third type, influenza C causes a mild common-cold like illness.

Both influenza A and influenza B cause outbreaks and epidemics whereas influenza A is also responsible for pandemics. Currently there are two distinct families or ‘subtypes' of influenza A circulating - these are known as the H1 and H3 subtypes based on their haemagglutinin protein. 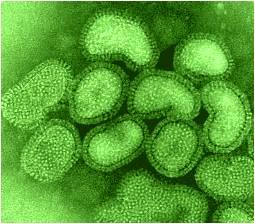 The actual viruses can only be visualised by use of an electron microscope which provides a black and white image. In this we see particles of various shapes varying from round to kidney shaped and sometimes quite irregular. They are usually about 120 nanometres in diameter, that is a little over one ten thousandth of a millimetre, and one of the characteristic features that can be seen is that their surface is covered with protrusions or spikes. These spikes are the important haemagglutinin and neuraminidase proteins which are required for the infectious process of the virus and are the main ‘antigens' against which our immune systems produce protective antibodies when we are infected or vaccinated.

Haemagglutinin spikes predominate with around four to every one neuraminidase and are considered the most important component in current vaccines. By immunological studies, 18 distinct forms of the influenza A haemagglutinin (the most recent are H17 - discovered in 2012 in fruit bats, and H18 - discovered in 2013 in a Peruvian bat) and 9 distinct neuraminidases (NA's) have been recognised and the viruses are divided into ‘subtypes' based on their haemagglutinin antigens (H1 to H18). Influenza B does not have separate distinct subtypes.

Subtypes H1 to H16 and N1 to N9 are found mostly in wild birds. The NA genes for H17N10 and H18N11 (in bats) are highly divergent from other known influenza NAs and appear to be unique to the bat population, but have shown to infect and replicate in other mammalian cells.

A great deal is now known about the structure of the viruses and how they replicate in cells - as for all viruses they can only replicate themselves once they can invade a living cell. Inside the viruses is their genetic information, structural or packaging proteins and proteins (enzymes) that help the virus to replicate. The internal proteins of influenza B differ from those of influenza A whereas those on all subtypes of influenza A are closely related.

The genetic material of the viruses is rather unique, consisting of single strands of RNA (in contrast to our own genetic information which is made up of double strands of DNA) and this results in a high rate of mutation which allows the viruses to change their haemagglutinin and neuraminidase antigens - this is known as antigenic drift. In addition the virus' RNA exists in eight pieces or segments that allows genetic mixing or hybridisation to occur that can be important in the evolution of pandemic viruses (known as antigenic shift).

Maybe surprisingly, we now know that the influenza viruses that infect humans actually evolved in birds and that aquatic birds are a reservoir for influenza A viruses containing all 16 haemagglutinins and nine neuraminidases. It is introduction of new influenza A haemagglutinins into the human population that results in pandemic influenza. It appears that influenza B branched from this evolutionary process a long time ago and has become a uniquely human virus; it is not found in birds and is not involved in pandemic influenza. For more information on influenza viruses see:http://www.mja.com.au/public/issues/185_10_201106/ham10884_fm.html.